Happy New Year 2014.  I can't believe another year has gone by and BULAT marches onto the completion of it's third year (BULAT anniversary 15th May 2011) and on towards its fourth.  It has been a busy year for BULAT in general, and it has also been a productive year for our little group as we strive towards our goal in the promotion of Lego collecting, Lego building and all other Lego activities in Brunei and to support our local Lego suppliers and discourage scalpers to ensure that the hobby is available to all, from the youngest Duplo toddler to the oldest bricking grandmother.

Membership on BULAT Facebook page started 2013 at just below the 600 mark and crossed the 1000th person sometime in September 2013.  At year end it was hovering at about 1100.  On facebook, BULAT has surpassed the Plamo group (800+ members), Die-Cast (900+ members) and Hot Wheels (700+ members) to become the biggest non-toy selling Brunei Facebook group.  That is a great achievement as BULAT is one of the younger toy groups here on Facebook.

However, membership numbers in itself isn't anything important if the group page is dead.  Thankfully, that's not the case on BULAT FB page as members regularly posts all sorts of Lego topics, topics about Legoland Malaysia, Lego hauls, sales, builds, etc. despite the fact that the group is in its terrible threes.  Shout outs go to Wafi for his Lego news posts, to Louise for all the Lego pictures she's been posting and to Zirah for the updates from Nanyang KB. 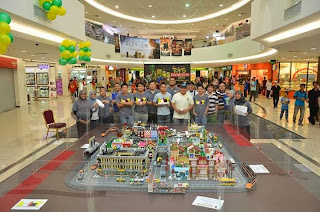 The membership has also helped each other in many different ways in the past year, with the most visible way being group buys.  Group buys is where a group of people come together to purchase a whole bunch of Lego for overseas to reduce the shipping cost thanks to combined shipping.  One of the most epic moment of last year was Chiam and his crazy shopping trip from Germany where he purchased a whole bunch of unique Lego for BULAT members in brunei.  Kudos to you Mr. Chiam.

Thankfully, overseas shopping isn't the main source of Lego in Brunei as we were joined last year by two new retailers (and three stores) catering to the needs of Lego collectors in Brunei.  OK, so technically Bebeland started selling Lego when it reopened its refurbished store in Kiulap in 2012 December, but that's close enough to 2013.  Both branches of Bebeland (Kiulap and Manggis) both sells Lego now, in addition to the three Hua Ho stores (Yayasan, Manggis, Tg. Bunut), Toys R Us and Nanyang.  These stores carry the "main line" Lego products for all ages. 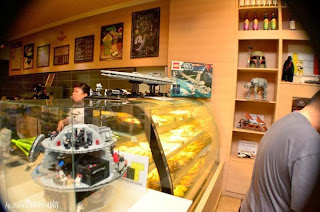 Exclusive items, such as the modular houses, the architecture series and the winter sets are not Lego "main line" and thus are not covered by the big stores.  Last year, Toy Santa stepped up to the plate and opened his new store in Times Square to cater for the crowd looking for collector and exclusive items and to supply this niche Lego market in Brunei.

Overall, I think BULAT as a whole has been successful in ensuring the financial viability of the Lego stores in Brunei.  The competition has gotten fierce though and there have been some ugly incidences, but instead of thinking of the market as a finite item, BULAT through its activities and members should be striving to organically grow the market to a point that we will be able to one day have a Lego exclusive store in Brunei. 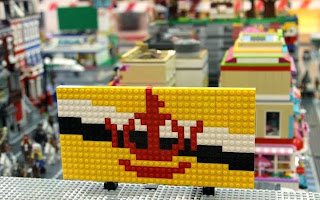 The most visible aspect of BULAT activities are the public displays.  There were eight such official BULAT displays in Brunei in 2013, double that of the year before (4 in 2012).  The three biggest displays are (in no particular order) the Display @ Mabohai Shopping Complex (D@MSC) in January, where there were 6 tables showcasing a variety of themes; the huge Display @ Times Square (D@TS) in September over multiple days; and the BULAT only BUILD 2013 in November where there were 11 display tables.

Some of the displays last year were also in conjunction with various commerical entities and governmental organisations, including the May Froth event with Gloria Jeans Coffee (May 2013), at the Taib fair with Pentagram (Jan 2013) and the AITI carnival (May 2013).  The biggest event here was in collaboration with Tourism Malaysia to promote Legoland Malaysia at Travelmania 2013 (Aug/Sept 2013). 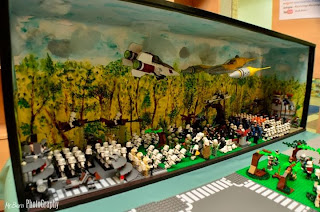 Last year was also the first year (and not the last) that BULAT officially participated in an overseas exhibition when our resident MOC guru Ampuan Hamid submitted his version of the Sultan Omar Ali Saifuddin mosque for the National Science and Technology Fair in Thailand (July 2013) that was organised by T-LUG.

BULAT was recognised by the Lego group in Denmark as Lego User Group sometime late 2012 and I'm pleased to announced that the recognition was renewed in December 2013.  This gives us in BULAT an important direct line of communications with the department in Lego dealing with community affairs. 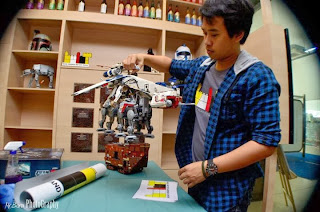 2013 was also the year that we congratulated BULAT Admin sista Zulhilmi for getting his naik pangkat to papa, and bid adieu to Orang Kaya Face of BULAT Zulfadli as he stepped down from his Admin position (but not his FOB position) to pursue his other dreams.  We thank you FOB for your service as Admin.

The new year will bring its fair share of challenges, but I do know if we work together we can overcome them.  The Admins have rough dates for four public displays for the year - March, May, September and November, and the planning is already underway for the first two of these activities.  However, the first display that BULAT will be participating in isn't even in Brunei, as the Lego SOAS mosque has travelled again to Thailand for another display organised by T-LUG. 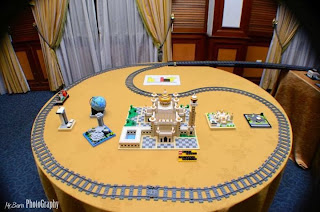 This year's sets seems to be a lot better than last year's, especially if you're a City fan.  There will be new train sets and an arctic subtheme for city.  Out now is the massive creator Sydney Opera House which is probably one of the best large creator sets ever.  We will hopefully be getting better licensed sets too - Star Wars has a rumoured cantina set and TMNT has new turtles.  Hopefully the Simpsons won't be a bust.  If you're female and/or like pink, there's the new Disney princesses to look forward to, and Friends will still be releasing new sets.